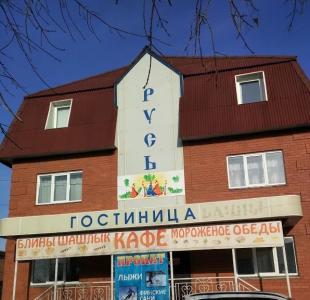 If you have lived in this hotel please give your feedback. It will help us to determine a rating of the hotel.
Leave a review
Description and services
The Rus hotel is located near the center of the city Hype. It offers rooms in different price categories.
The hype has no tourist attraction, although the city looks beautiful, and on the territory of the district there are therapeutic lakes and nature reserves, and forest in suburban area on the earth's surface expire several springs that have a soft and tasty water. Also widely known among the local population and the fact that a surprising, refreshing and pleasant taste of the local water produced in the territory of the city of wells drilled in this artesina sources.
Of the city begins on the regional road Р328 Hype — Ust ' -uyskoye. A large economic and industrial centre of the Kurgan region, centre of agriculture and food industry.
The city was founded in 1892[citation 59] as the railway station settlement, the Hype built nearby (14 miles) from the then major of the village of bird in the construction from Chelyabinsk West-Siberian railway — the initial section of the Siberian railway[2]. From 1932 to 1943, was part of the Chelyabinsk region as the village of the Hype, with the formation of the Kurgan region included in its composition. The received city status in 1944.
120
km
Airport
1.1
km
Railway station
0.7
km
Center
Reminder Call
Non-smoking Rooms
Internet and TV
Cable / Satellite TV:
Free
Meal
Continental Breakfast:
2.68 USD
Lunch:
2.68 USD
Dinner:
2.68 USD
Accommodation and payment
Check-in 14:00
Check-out before 12:00
Payment on the website
Book now